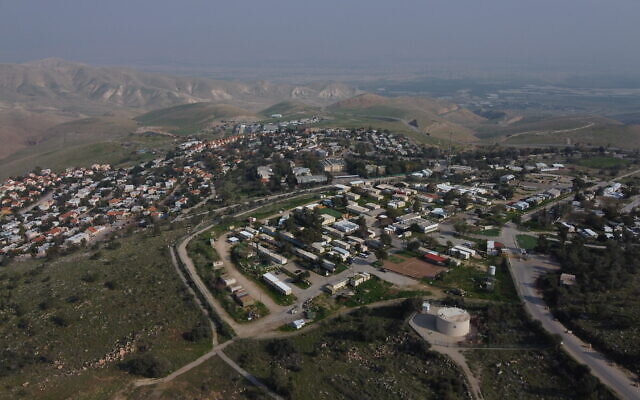 In this February 18, 2020 photo, a view of the West Bank settlement of Ma’ale Efraim on the hills of the Jordan Valley. (AP/Ariel Schalit)

The Arab League said Thursday that Israel’s controversial proposal to annex part of the West Bank constituted a “new war crime” against the Palestinians, during a virtual conference chaired in Cairo.

“The implementation of plans to annex any part of the Palestinian territories occupied in 1967, including the Jordan Valley… and the lands on which Israeli settlements are standing represents a new war crime… against the Palestinian people,” Arab foreign ministers said in a joint statement.

The Arab League also urged the United States to “withdraw its support in enabling the plans of the occupying Israeli government.”

US President Donald Trump in January unveiled a peace plan to resolve the Israeli-Palestinian conflict.

Rejected by the Palestinians and condemned by much of the international community, the plan gives Israel the green-light to annex Jewish settlements and other strategic territory in the West Bank. 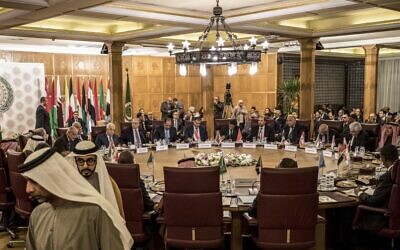 An Arab League emergency meeting to discuss US President Donald Trump’s peace proposal, at the league headquarters in the Egyptian capital Cairo on February 1, 2020. (Khaled Desouki/AFP)

An Israeli coalition government agreement reached last week includes a framework for implementing the annexations outlined in the plan, starting in July.

Under the US proposal, the Palestinians would be granted a sovereign but demilitarized state in the remaining parts of the West Bank and the Gaza Strip, along with promises of major investment.

The Palestinian state’s capital would be on the outskirts of Jerusalem, which would remain fully under Israeli sovereignty.

Palestinian Authority Foreign Minister Riyad al-Malki cautioned against the annexation during the Arab League meeting, saying it would “end the two-state solution.”

He said the move would “turn the battle from a political one to an endless religious war… that will never bring about stability, security or peace to our region.”

On Monday, the United States said it was ready to recognize Israel’s annexation of key parts of the West Bank, but also asked the new unity government to negotiate with the Palestinians.

The Israeli government has approved emergency measures for its security agencies to track the mobile-phone data of people with suspected coronavirus.

The new powers will be used to enforce quarantine and warn those who may have come into contact with infected people.

The temporary laws were passed during an overnight sitting of the cabinet, bypassing parliamentary approval.

The Association for Civil Rights in Israel called the move “a dangerous precedent and a slippery slope”.

Such powers are usually reserved for counter-terrorism operations.

Details of how the “cyber-monitoring” will work were not disclosed but it is understood the location data collected through telecommunication companies by Shin Bet, the domestic security agency, will be shared with health officials.

Once an individual is highlighted as a possible coronavirus case, the health ministry will then be able to track whether or not they are adhering to quarantine rules.

It can also send a text message to people who may have come into contact with them before symptoms emerged.

The head of the justice system said the move would save lives, while Israel’s prime minister said it struck a balance between public-health needs and civil rights.

Israel is still in the relatively early stages of the pandemic – and many ordinary Israelis are used to complying with measures they see as important for their security.

But this is a public health threat, not a security one.

The ultimate test of bolstering the powers of surveillance agencies will lie in their longer term effectiveness: whether they can slow the spread of the coronavirus.

In an often tense and divided region, increasingly parts of the security infrastructure are doubling up as tools of public-health enforcement by both Israeli and Palestinian authorities.